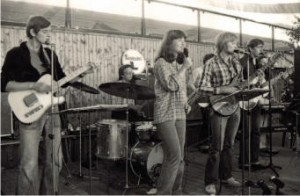 The band was founded in the year 1973 by

After a short term of reharsals, which took place in the former post office of Nettelstedt, the first live gig was performed during a disco event organized by the youth group of the “Freilichtbühne Nettelstedt” on 30 April 1974 in the sports bar of Nettelstedt.. The first band name was „Gold Rush“.

During the following years some more gigs were performed on such disco events of the youth group. By Feb­ruary 1978 Rainer Hagemeyer joined the „as a substitute“ of Achim, who had to serve 3 months of an air force training in the USA. From now on Rainer was a permanent member of the band. During the same year  Christine Schramm (as singer) as well as Frank Diekmann (keyboards) joined the group. The first performance with this line-up took place at the 1978 „Volksfest“ in Nettelstedt. Thus, finally, the band „Travellers“ was born.

Along with many gigs during the following years there were –mainly job- related- lively changes in the bands‘ cast:: Andreas Diekmann replaced his brother Frank on keyboards, in case of Jörg initially Roland Voss and later Roland Meier took over the drums. Conny Tiemann joined as additional singer and Hans had to leave the band because of a job-related move to Hessen.

Asking today’s (senior) band members for performance highlights you will always get spontaneous answers like: the 1979 Volksfest in Nettelstedt together with a Bavarian brass band, the ‘Weekend against Cancer’ in the ‘ Kulturhalle Lübbecke’, 1980 and the ‘Bierbrunnenfest’ in the city of  Lübbecke, 1985. Of course this table is not complete and can be extended at will.

In the year 1992 the „star“ named Travellers went down, due to the fact that nearly all of the band members in the meantime had started their own families with children and thus had very little time left.

After this, for about 10 years there was silence.. Until in 2003 the idea arose to play some songs on Hans‘ 50th birthday (April, 2004) again. Some of the old and a few new faces gathered together to rehearse for a little ‚unplugged‘ programme.

Under the name „CoJack“ (Congratulations, Jack!) along with Hans, Dieter, Achim, Rainer and Jörg in addition Bettina, Melle and Andrej joined together to play an approx..1 hour lasting unplugged-concert. With lots of enjoyment and a big success. And all of it on a historical date: 30 April 2004.

Because: right on that  date 30 years before the very first gig of the band took place at the same location. This led to the question: ‘shouldn’t we go on?’ The answer was found quickly. The Travellers were „reloaded“.

The first performance oft he new formed „Travellers“-was then on 05 May 2005 at the „Rock am Brink“ on  “Father’s Day” at the Freilichtbühne Nettelstedt.

December 2006 Jan Rüting joined the Travellers as drummer. He was the man behind the mixing board on „Schützenfest“ of April 2006. He now takes care of a rock-solid and diverse rhythmic foundation. Jan left the Band in Jun 2016.